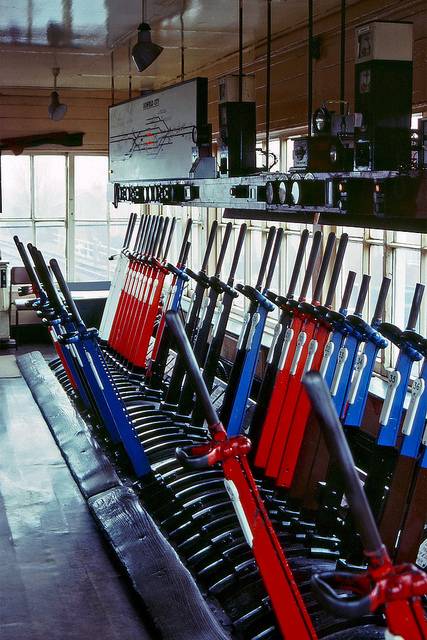 Interior of Lichfield City No1 Box. The interior of Lichfield City signal box showing the block shelf above the lever frame. Friday 21st December 1990 Lichfield City No1 signal box was located at the Birmingham side of Upper Saint John Street underbridge between the Down and Up Platform lines, and was a London and North Western Railway Type 4 design which opened in 1885 fitted with a 50 lever London and North Western Railway Tumbler frame. Lichfield City No2 signal box closed on 25th November 1973 and No1 box was renamed Lichfield City controlling all the remaining signalling at Lichfield City station. Closure came on 9th October 1992 when signalling between Aston North Junction (exclusive) and Lichfield Trent Valley Junction (exclusive) passed to Aston Signalling Centre The block shelf carries (left to right) an illuminated track diagram, a power indicator, a British Railways Standard absolute block instrument from/to Four Oaks signal box, a London Midland and Scottish Railway closing switch, a pair of bardic lamps and a British Railways Standard absolute block instrument from/to Lichfield Trent Valley Junction signal box. Attached to the front of the block shelf are a series of semaphore signal arm repeaters and indicators, sealed releases and pointdetection indication from David A. Ingham, original photographer unknown