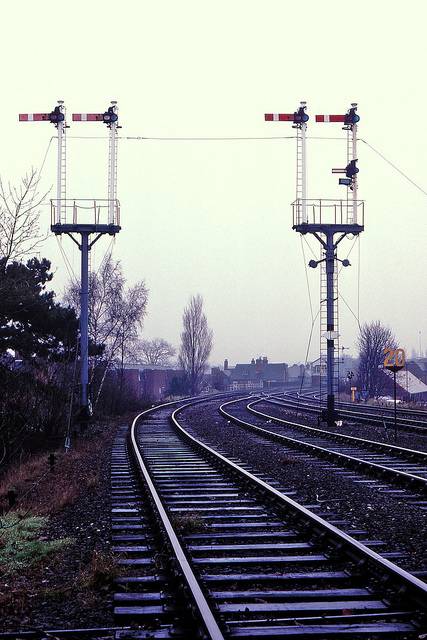 View from No1 Signal Box from the south. South Staffs Line is to the left. Lichfield City signal box (left to right) 5, 6, 10 and 12 signals protect the junction between the Walsall and Sutton lines on the approach to Lichfield City station. Friday 21st December 1990 Lichfield City No1 signal box was located at the Birmingham side of Upper Saint John Street underbridge between the Down and Up Platform lines, and was a London and North Western Railway Type 4 design which opened in 1885 fitted with a 50 lever London and North Western Railway Tumbler frame. Lichfield City No2 signal box closed on 25th November 1973 and No1 box was renamed Lichfield City controlling all the remaining signalling at Lichfield City station. Closure came on 9th October 1992 when signalling between Aston North Junction (exclusive) and Lichfield Trent Valley Junction (exclusive) passed to Aston Signalling Centre Both brackets are London Midland and Scottish Railway two doll balanced brackets on a tubular main stem. The left bracket carries (left to right) 5 signal (Dn Walsall Home To Dn Main) and 6 (Dn Walsall Home To Dn Platform). The right bracket carries (left to right) 10 (Dn Sutton Inner Home To Dn Main) and 12 signal (Dn Sutton Inner Home To Dn Platform) with 8/11 signal below it. 12 feet above rail level on the main stem is a white diamond which indicates to the driver that his train is occupying a track circuit that indicates his presence to the signalman which was added on 2nd November 1958 when a new down Sutton outer home signal (9 signal) was provided 440 yards in rear of the inner homes for acceptance purposes 8/11 signal cleared in conjunction with the two stencil indicator below it. When 8 signal (Dn Sutton Warning To Dn Platform) cleared a W indication was given, and when 12 signal (Call On To Dn Platform) cleared a C indication was given The 20 mph cut out speed restriction indicator on the Down Sutton line applies to a permanent speed restriction between 13mile 37chains and 17mile 39chains. The restriction through Lichfield City station was only 39chains long, the mileage changed where the Down Sutton line joined the Down Walsall line from 13mile 43 chains to 16mile 57chains from David A. Ingham, original photographer unknown